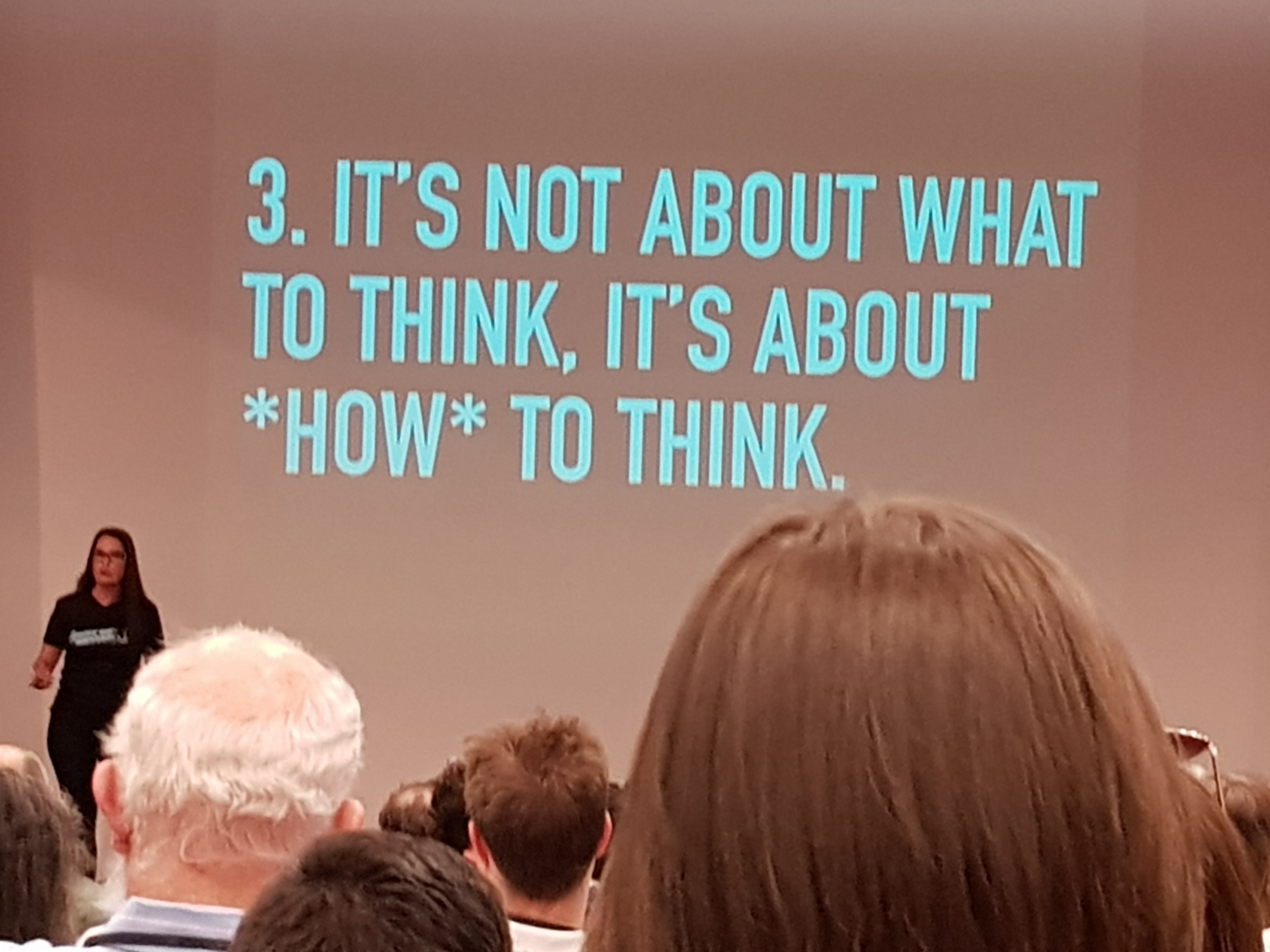 Of course, we can’t reproduce the buzz and the fun of being at the recent conference in Melbourne, but the following are some of the highlights… 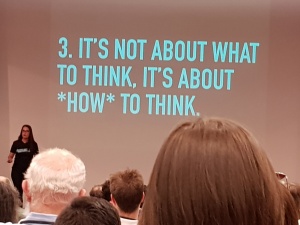 Grief vampires (Susan Gerbic): refers to psychics who ‘talk to the dead’. Best idea is to take them out before they gain a high profile in the media. As skeptics we can try attending an event by getting it paid for by local skeptics community at e.g. $10 each. Dress to be ‘cold read’ by wearing subtle items like small lapel pins. If you want a journalist to cover the event, take them along, don’t take the story to them after it’s over.

Guerilla Skepticism: involves editing Wikipedia entries, having been trained by Susan Gerbic. Some Australian skeptics are already doing it.

Check out the Holy Koolaid channel on YouTube, by Thomas Westbrook. https://www.youtube.com/channel/UCzvoUDoDu-cKIb11rg4ODDQ/featured  Thomas says: “Welcome to my channel. Here at Holy Koolaid we never back down from the difficult questions wherever they lead. Doubt is a gift! You Can be Free. Dare to be curious. Don’t drink the Koolaid!” and explains that he “…went from a Christian to an ex-Christian atheist promoting free-thought and fighting against cult-like manipulation tactics used by authoritarian governments, abusive partners, and religious organizations.”

Home remedies (Brad McKay): even if they’re harmless, they can delay people getting proper treatment—an opportunity cost. See website Center for Complementary & Integrative Health, which is a reference on various CAMs; https://nccih.nih.gov/ . The ‘more is better’ trend in supplements and remedies is down to marketing.

Regulation of ‘therapeutic goods’ in Australia (Panel chaired by Ken Harvey). Should we complain about dodgy products to TGA, ACCC and FSANZ – does it do any actual good? Short answer is yes. We need better consumer education, however. The TGA has good rules but bad enforcement of them. 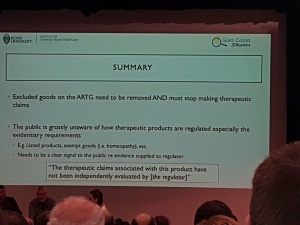 Philosophical considerations: science works for a lot of enquiry but can’t answer all questions. The Skeptics movement needs more empathy, to help us understand people’s motivations and realities before we can help them drop unhelpful beliefs.

Brain Myths (Steve Novella) – we still don’t know if we’ve got our understanding of the brain totally right. We have 100 trillion synapses, after all. We have networks of modules over both sides of the brain, via the corpus callosum. There appears to be some slight differences between male & female brains but it’s not definitive and current research is trending towards there being negligible difference. There’s a lot of nonsense around about ‘hacking’ your brain to take shortcuts and bypass normal processes to being smarter or better somehow. E.g. the ‘Mozart Effect’, which doesn’t exist. Also EMDR, which is just standard psychological exposure therapy with no benefit from the eye movement. However, Trans-cranial Magnetic Stimulation works for many conditions, though not pain.

Constructivism (Cara Santa Maria) The Dunning-Kruger effect applies in lots of areas: we very often don’t know how much we don’t know. We do know that our minds play tricks on us, which enables us to try to work through the resulting mistakes. Denialists are pseudo-skeptics, who work backwards from the desired conclusion. Studies have shown that smart people are likely to be more polarised in their opinions on e.g. climate change.

Correcting people’s grammar on the internet during a skeptical argument (Lee Murray).  There’s a thing called Standard English, which is what’s taught in school, is read in books and not geographically localised. Its use is about power. But is it more logical? No… for example the dreaded ‘’youse’’ is more logical that the “you” of standard English. So we’re reacting to our own social biases. It is far better to challenge people’s ideas rather than their language.

Darwin (Tina Hanigan): Two kinds of dodgy thinking arose from his publication of ‘On the Origin of Species’ – ‘social Darwinism’ and creationism. The former was discredited early on but was used by economists and politicians to justify their policies (whereas the evolutionary theory itself started out as a way to explain the world as observed.) Creationism has however become more popular and sophisticated as time passed. Now it’s been modified to challenge alleged ‘faulty evidence’ presented by evolutionary biologists.

Cults (Jo Thornely): It’s important to remember that cult members are normal people but cult leaders are bastards!  Jo has a podcast called ‘Zealot’ at https://www.stitcher.com/podcast/zealot and a book of the same name. 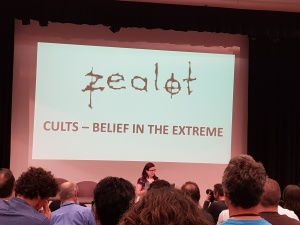 How to start a cult:

The Skeptics’ Guide to the Universe Panel:

Hear the whole thing at https://www.theskepticsguide.org/podcasts/episode-754 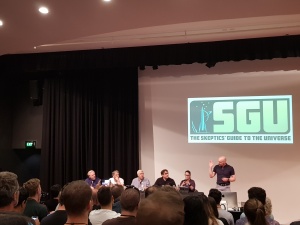 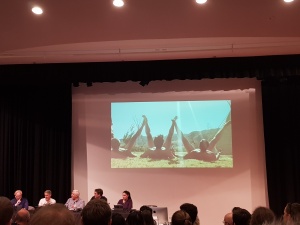 Alice in Bullshitland (Nicholas Johnson): ‘Nonsense’ is perverted sense. It’s difficult to tell what people are saying and therefore to argue against it. The lack of clarity is a defining feature of nonsense/bullshit. You can use the question ‘What did you mean by that?’ to engage with bullshit, though it may not get you far. There is no need to attack every bit of bullshit we come across – be selective, as it can be pretty tiring. 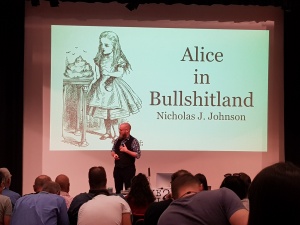 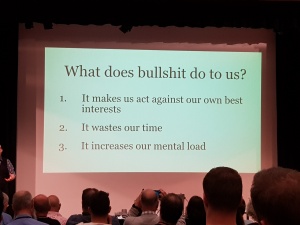 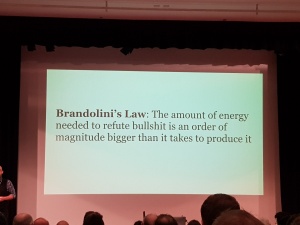 ‘On Bullshit’ by Henry Frankfurt https://en.wikipedia.org/wiki/On_Bullshit